A heavily armed group kidnapped two Chinese miners from a mining site in Ebonyi State on 2 June. The kidnappers targeted an operation run by Greenfield Metals Nigeria Limited and fired indiscriminately to scare the miners before abducting their victims. Local media sites have reported that the Chinese nationals are still missing. Greenfield Metals has experienced two kidnappings in Ebonyi State this year. In both incidents, Chinese workers were taken and released against an unknown sum of money. In the last two years, ransom payments for foreign miners in the State have reached N15 million (roughly USD 38,000).

A criminal group kidnapped a bank manager identified as Karina S., and forced her to steal 14 million pesos (approximately USD647,000) from the bank vault of her local branch in Mexico City. The gang had fitted Karina with an explosive belt and swapped her mobile phone for another smartphone to monitor her movements as she executed the heist. They had threatened to kill her family if she failed to comply. After leaving the bank, the kidnappers ordered Karina to take a getaway car to the Rio de Los Remedios canal and leave the money before walking away. Only then was she allowed to discard the belt. The targeted bank, BBVA México, is the largest financial institution in the country. A spokesman announced in a statement on 6 June that the belt bomb was fake, and that the incident was under investigation.

A piracy group that took six fishermen hostage off the coast of Gabon on 3 May, released them on 9 June after an undisclosed sum of money was paid. The victims, a South Korean, two Senegalese, and three Indonesians, were seized from two fishing vessels near Libreville and later released in southern Nigeria. A source close to the Gabonese government said the fishermen were held captive in the Niger Delta area. It was the second pirate attack off the Gabonese coast this year.

Criminals set fire to a textiles business in Cuajimalpa, a borough of Mexico City, on 16 June. The owner had been contacted by a local gang that demanded 25,000 pesos (USD1,000). After several threatening calls, the businessman said he was unable to pay. The extortionists set his business ablaze four days later. The local Prosecutor’s Office has documented 20 similar cases in the borough over the last twelve months, with extortion rates averaging from 500 to 2,500 pesos per week.

Armed tribal fighters kidnapped two local officials in the Tombouctou region city of Dire on 17 June. The kidnappers reportedly stormed a political office of the sub-prefects of Dire and Dangha and abducted them before fleeing the area. The attack left three people dead. Local security forces responded but were unable to locate the kidnapped officials. Multitude armed groups are fighting for Islamist control in northern Mali, including Ansar Dine, al-Qaeda in the Islamic Maghreb (AQIM), the Movement for Unity and Jihad in West Africa (Mujao), and the Signed-in-Blood Battalion and the Islamic Movement for Azawad (IMA). These groups engage in kidnapping activities and have abducted dozens of villagers across the center and north of the country this year.

On 18 June, the Colombian Army freed a Swiss tourist and his Brazilian companion after leftist guerrilla fighters kidnapped them in mid-March. Daniel Max Guggenheim and Jose Ivan Albuquerque were rescued during a military operation in the southwestern Cauca department, an area beset with drug-trafficking violence. The “Dagoberto Ramos Mobile Column,” a group of about 2,300 armed FARC dissidents, had abducted the pair. The military unit that freed them also captured one of the suspected kidnappers, who was guarding the couple when rescued. The hostage takers had initially asked Mr. Guggenheim’s family for a ransom equivalent to USD266,000 before lowering their demand to USD1,300. Since breaking away from the FARC, dissident groups have continued armed resistance to the government, financing themselves through drug-trafficking and illegal mining.

Criminals kidnapped a businessperson on the Long Thanh – Dau Giay expressway in the southeastern province of Dong Nai on 18 June. They forced the victim, his wife, and their daughter into a waiting vehicle and drove off towards Ho Chi Minh City. During the abduction, the kidnappers threatened the businessman’s’ daughter with a needle they warned contained HIV unless he transferred a large sum of money into a Bitcoin account. The businessman was beaten during the two-hour ordeal and only released with his family once the kidnappers had received several payments. The police launched an investigation that led to the arrest of several suspects.

Islamist fighters from the rebel group, Hayat Tahrir Al-Sham (HTS), kidnapped British aid worker, Tauqir Sharif from the Atmeh refugee camp near the Turkish border on 22 June. Mr. Sharif was working for The Unity Project, a humanitarian effort delivering aid to Syria when the militants abducted him. He had been living and working as the head of logistics for food convoys from British charities into Syria since 2012. A local media source suspects that his popularity may have contributed to the kidnapping as anyone with a rising profile is treated with antipathy and suspicion by the HTS militia leadership. HTS controls large swathes of the northern Idlib province, including the Bab al-Hawa border crossing with Turkey close to where Mr. Sharif was taken. The group has set up a civilian administration in the area, which governs thousands of employees. Some local media sites have labeled the incident as an arrest instead of an abduction because of the Islamists’ semi-official capacity. The last foreigner abducted in the province was a South African cameraman, held in Islamist detention for almost three years.

A group of armed men used a minibus to abduct an Egyptian activist from outside the Prosecutor’s Office in New Cairo on 23 June. Miss Sanaa Seif had been filing a police report about an assault on her family before she was taken. She later turned up in police custody and has since been informed she is under investigation and could be charged for inciting terrorism, misusing social media, and spreading false rumors. In recent years, Egypt has launched an unparalleled crackdown on the media and activists, imprisoning dozens and occasionally expelling foreign journalists. A Human Rights Watch report in April stated that President Abdel Fattah al-Sisi has upheld a nation-wide state of emergency that empowers the security forces with limited oversight. This, in turn, has led to the forced disappearance of dissidents from all backgrounds.

The Mexican Navy has reported that its anti-piracy efforts have significantly reduced attacks on commercial vessels in the Bay of Campeche in the southern Gulf of Mexico. Piracy has plagued the coastal waters of Campeche, Tabasco, and Veracruz, where a rising number of attacks have been registered over the last twelve months. In 2019, there were 20 reported incidents, four more than the previous year, while pirates have targeted 19 ships or platforms this year. The Mexican authorities have dispatched vessels of varying sizes and conducted thousands of inspections, both onshore and at sea. According to the report, the Bay of Campeche has remained free of piracy incidents since the operation began in May.

Pirates assaulted a large fishing vessel and kidnapped a Ghanaian and five South Korean nationals south of Cotonou’s port on 24 June. The incident marks the seventh piracy-related abduction in the area this year, compared with two attacks from the same period in 2019.

Suspected Islamist militants kidnapped at least ten local aid workers in southwest Niger near the border with Burkina Faso on 24 June. According to APIS, the charity representing the abducted staff members, the attack took place close to a food distribution point in the village of Bossey Bangou. Jihadist groups with links to Islamic State and al Qaeda have been expanding their presence in the region, and attacks on civilians and the security forces have increased significantly over the last two years. APIS is a Niger based humanitarian organization that has worked with the UN World Food Programme during the coronavirus outbreak.

Suspected Boko Haram militants have reportedly demanded USD500,000 to release four abducted aid workers and a private security guard on 30 June. The victims appeared in a two-minute video released by the Islamist group on 28 June. They identified themselves, saying they each worked for different organizations naming large aid groups Action Against Hunger, the International Rescue Committee (IRC) and Reach. Their nationalities are not known. The kidnapping underscores the evolving security crisis in the north-east of Nigeria, where they are held captive. Boko Haram was under pressure at the beginning of the year, following a series of coordinated Nigerian-Chadian military operations in the north that dislodged elements of the group. However, in recent months violence has worsened. BH has adapted its guerilla tactics and reclaimed territory. Nigerian forces have withdrawn from rural checkpoints into garrison towns, and hundreds of civilians have been killed. 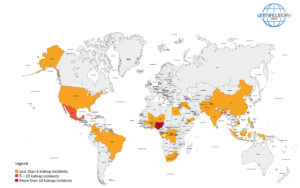 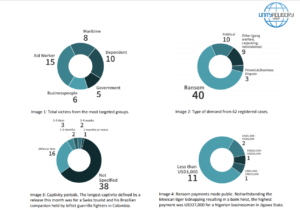 Employees and their families can be exposed to high risks and can become targets for express kidnappings, home invasions, stalking, child abductions and more, especially during trying times as the one we are faced with currently.

iTOO Cover assures you of protection against financial loss in over 20 events as well as direct access to the Unity Advisory Group and On Call International as both your consultants and service providers.

We can assist individuals and businesses to:-

Why you should consider contaminated product recall insurance

The recent headlines have reported that South Africa’s biggest food manufacturer issued a product recall for certain KOO and...

What does it take to be an EXPERT? – The same dedication as it takes to win an Olympic medal. iTOO...

17 June 2021
Read more
We use cookies on our website to give you the most relevant experience by remembering your preferences and repeat visits. By clicking “Accept All”, you consent to the use of ALL the cookies. However, you may visit "Cookie Settings" to provide a controlled consent. Read more.
Cookie SettingsAccept All
Manage consent

This website uses cookies to improve your experience while you navigate through the website. Out of these, the cookies that are categorized as necessary are stored on your browser as they are essential for the working of basic functionalities of the website. We also use third-party cookies that help us analyze and understand how you use this website. These cookies will be stored in your browser only with your consent. You also have the option to opt-out of these cookies. But opting out of some of these cookies may affect your browsing experience.
Necessary Always Enabled
Necessary cookies are absolutely essential for the website to function properly. These cookies ensure basic functionalities and security features of the website, anonymously.
Functional
Functional cookies help to perform certain functionalities like sharing the content of the website on social media platforms, collect feedbacks, and other third-party features.
Performance
Performance cookies are used to understand and analyze the key performance indexes of the website which helps in delivering a better user experience for the visitors.
Analytics
Analytical cookies are used to understand how visitors interact with the website. These cookies help provide information on metrics the number of visitors, bounce rate, traffic source, etc.
Advertisement
Advertisement cookies are used to provide visitors with relevant ads and marketing campaigns. These cookies track visitors across websites and collect information to provide customized ads.
Others
Other uncategorized cookies are those that are being analyzed and have not been classified into a category as yet.
SAVE & ACCEPT