Armed men abducted and killed 11 coal miners in Machh, a small mining town in Baluchistan province, on 3 January. All of the victims were ethnic Hazaras, a minority Shiite group often targeted by Sunni extremists. The Islamic State militant group claimed responsibility on 4 January. The group has carried out multiple attacks in Baluchistan to incite sectarian conflict between the ethnically mixed population. The Taliban have also maintained sanctuaries in some parts of the province near the border with Afghanistan.

Criminals kidnapped Wilner Séraphin of Haiti’s National Police (PNH) in Port-au-Prince on 4 January. The kidnappers demanded HTG 1million (roughly USD 13,500) for his release, and freed the officer four days later against an unspecified ransom. In a separate event, a criminal gang abducted Sister Dachoune Sévère of the Congregation of Saint Thérèse of the Child Jesus, on 8 January, demanding HTG 250,000 (roughly USD 3,300) for her release. The kidnappers freed her two days later against an unknown sum of money. According to local human rights organizations, these cases form part of a wave of kidnappings and murders that have intensified over the last three months. In recent weeks, the police have carried out several operations in volatile areas of the capital, resulting in dozens of arrests and the interruption of criminal activities. Still, without tackling the root of political and social insecurity, crime groups are likely to continue their operations.

Suspected Boko Haram (BH) militants kidnapped Abubakar Idris, a United Nations High Commission for Refugees (UNHCR) employee and the Secretary-General of National Union of Yobe State Students, Mua’zu Bawa, along the Maiduguri/Damaturu road in Borno State on 7 January. The pair traveled to Maiduguri from Damaturu when they ran into an illegal vehicle checkpoint (IVCP). According to local monitors, BH set up IVCPs under the guise of security forces with the militants dressed in military fatigues and with the presence of stolen military Hilux vehicles parked on the roadside to give the impression of an official checkpoint. The group has abducted at least 35 people along the same route since mid-December, including Emmanuel Peter, a local humanitarian aid worker with the World Food Programme (WFP) who was taken on 4 December and reportedly killed the following week.

Police rescued a Portuguese businessman from a kidnapper’s mountain hideout in the Aragua state (100km of the capital, Caracas) on 9 January. The kidnap gang had abducted the businessman in the El Concejo area in late December and demanded a high USD ransom.

Suspected al Shabab militants robbed a bus conductor and kidnapped three passengers in an attack in Tarbaj, Wajir County on 10 January. The bus had been traveling from Mandera County to Nairobi when it was stopped by gunmen, armed with rifles and RPGs, in the Darkut area. According to eyewitness reports, the assailants fired into the air and ordered all passengers to disembark before separating the men from the women and kidnapping three passengers. Their fate remains unknown. In December, the militant group abducted and beheaded a chief in Wajir county. They had kidnapped a group of local security officials and the chief before releasing them and later killing the administrator. The militants have been roaming the area in the past month, threatening large-scale attacks.

On 15 January, armed men ambushed and kidnapped a priest and his brother as they traveled along the expressway from Lambata to Lapai (40kmn northwest of the capital, Abuja). The gang demanded 30 million nairas (USD 80,000) the next day. Following negotiation with the victims’ families, the kidnappers accepted 5 million nairas (USD 13,000) for the hostages release.

The police arrested a kidnap group that had abducted a local businessman for Rs 5million (USD 31,000) and released him against a ransom of Rs 400,000 (USD2,400) on 21 January. The kidnap incident had occurred in Karangi, Karachi, on 17 January. Following his release, the victim’s de-brief reportedly led to intelligence on the hostage-takers whereabouts, which ended in a police raid and the kidnapper’s capture.

Kidnappers on 18 January released Neurologist Dr. Nazifullah Payandeh after receiving a ransom payment, 20 days after his abduction in the western Herat province. The amount paid was not made public, but based on Unity data from 2020, ransoms for individuals of perceived wealth such as doctors, businesspeople and dependents, ranged from USD18,000 up to USD120,000.

Heavily armed pirates kidnapped 15 sailors from a Turkish-crewed container ship in Nigerian waters on 28 January. According to local media, the attackers used explosives to breach the protected citadel before taking control of the vessel. An Azerbaijani crew member was killed during the raid. The latest report by the International Maritime Bureau, revealed that pirates in the Gulf of Guinea, which borders more than a dozen countries, kidnapped 130 sailors in 22 incidents last year, accounting for all but five of those seized worldwide.

Libyan security forces freed several Egyptians who had been kidnapped in Tobruk on 29 January. Egyptian newspapers reported that a Libyan militia had kidnapped many of their countrymen on 10 January after illegally detaining them on entry into Libya. The kidnappers had demanded 100,000 Egyptian pounds (USD 6,400) for each of the victim’s release. Egyptian authorities had launched a rescue of 23 Egyptian citizens kidnapped and tortured by the Al-Wefaq militia in June 2020. The freed prisoners were sent back to Egypt just hours after Egyptian President Abdel Fattah El-Sisi had ordered state agencies to find and return them. 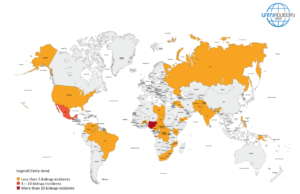 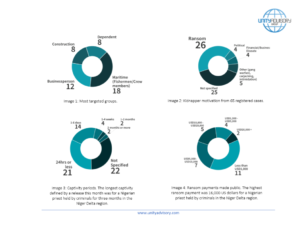 iTOO Loves Brokers. What Do You Love?

It’s that time of year again! Love is in the air and people everywhere anxiously await hearing those three...

In February, pandemic-induced socio-economic grievances will spill over in cities across the Middle East and Africa, particularly in Malawi, Sudan...